Ok, lets say we – the government – have decided to build an Ultra Compact City. How should we carry this out to be successful? 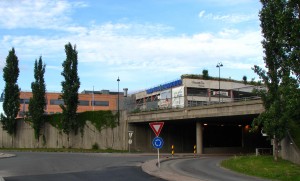 A pleasant but relatively dense environment with good communications makes it possible to co-locate housing, shops and jobs. 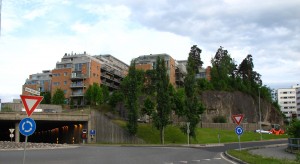 The residents of these flats have plenty of shops, restaurants and employment opportunities within walking distance.

An Ultra Compact City requires to be built all-at-once, so a strong lead from the government is required to get it going. Not only must the government take the lead in planning and development, it must also be equipped with the required expropriation tools to be able to execute a large development in one go.

A main problem to be addressed is that it will be advantageous for entities (be it people or firms) to locate right outside the Ultra Compact City. This way, one can get the advantages bestowed by living close to a large city while benefiting from lower construction costs. One of the main points with an Ultra Compact City is also to be able to create a clearly defined city-park-countryside layout, so that the city residents can easily pop out of their city and be in the countryside. We would also like to maintain farmlands. Extensive building of suburbs around a Ultra Compact City would be highly detrimental to this.

The government should counter this push for building outside the city limits by levying a stiff tax on conversion of land from farmland to built-up, in addition to the usual zoning and city planning restrictions. This would make it economically attractive to build only in the city proper.

Use road pricing to avoid congestion 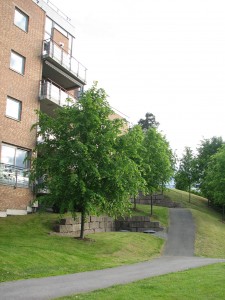 With the road removed there is room for some trees

When the city has been built it is important to avoid the transport systems getting overloaded. Consequently road pricing should be utilized to ensure traffic never gets congested.

The income from the road pricing could be used to support the public transport system, which preferably should be completely free except during rush hours to stop overcrowding it. This is because additional travelers cost almost nothing to accommodate on a bus or a train, and being able to freely zip around the city would be a significant boon for people living there.