Why do we live in cities? Because that’s where the jobs are? Because of the lifestyle on offer?

Living close to other people enhances your productivity

The relevant metric for how many people you live close to is measured in travel time – the number of people living within 10, 30, 60 or 120 minutes from you. This determines how many workplaces, restaurants, bars, hospitals, shops or acquaintances that are accessible to you from your home. It also tells how many potential customers a company has in the vicinity, something which improves efficiency and makes it easier for a business to specialize on what they are really good at. Additionally, if you require a service you are more likely to be able to find someone nearby who can sell it to you. 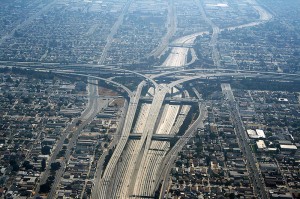 This will translate into higher productivity and thus higher wages earned. It is not a coincidence that city dwellers as a norm always have earned more than their brethren in the countryside.

From the point of view of efficiency a city should consequently be as compact as possible combined with good communications, to enable the population density over wide areas to reach the critical mass required to support the kind of services that can now only be found at the center of large cities.

The city should also be as large as possible – or perhaps we should describe it as building many ultra compact cities quite close to each other so that they combine to one megacity. The world already knows a few such areas – the German Ruhrgebiet, or the Tokyo-Yokohama area – and they are generally unparalleled in their productivity.

This leads to one of the primary goals with an building Ultra Compact Cities: creating a type of city that would support very high population densities across vast areas. Such a megacity would be unprecedented in productivity, and should a country choose to build ultra compact metropolises on a large scale the associated productivity improvements would make its citizens the most productive and hence the wealthiest in the world. Nothing less. And the initial cost of putting those roads under ground would be repaid many times over.