The street width of a modern city is determined by the need to keep the traffic flowing. If the street is replaced by a park then buildings can be pulled together, making the overall city smaller.

A dense, modern city like New York typically has around 40% of its acreage used for streets. If the street width is reduced by half it follows that the entire city would become 20% smaller, giving a corresponding fall in travel times and infrastructure construction costs. 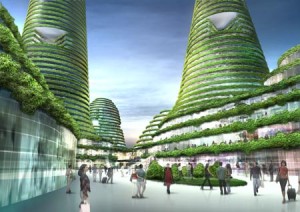 By putting the roads under ground in combination with high-rise buildings we can achieve a very high population density while maintaining a pleasant city environment and effective transportation systems.

Underground roads means eliminating most constrains on area usage of roads, and it becomes possible to dimension the road network as required. Contrast this with a normal city with roads above ground where more roads means the city becomes more spread out – meaning more need to travel, meaning more traffic, meaning more roads are required.

Underground roads also limits the negative effect of traffic on the local environment. Noise is contained under ground, and pollutants can either be vented away, cleaned or completely avoided with the use of electric trolley buses and battery powered cars. Congestion is avoided with sufficiently stiff road usage fees to limit traffic to what the road system actually has capacity for.

In the Ultra Compact City short distances and many travelers means a very large amount of transportation would take place by foot or bicycle, and it would be possible to get a very efficient public transport system up and running.