The flaws of regulations, subsidies and cap’n trade

Why is a uniform, global Carbon Tax better than the currently favoured alternatives of regulations, subsidizing emissions reduction efforts directly or using “Cap’n Trade”?
(Go up and read how a Carbon Tax should be set up before continuing)

To take regulations and subsidies first (“solar power has first priority on the grid in the middle of the day” or “all windmill farms get €€€ pr installed MW”), these methods suffer from the same type of problems that the Soviet Union’s planned economy had: it’s a top-down approach to economic control which is doomed to be both cumbersome and inefficient. The State Planners (or politicians, Eco pressure groups) decrees what is allowed or will get funding, and there is no room for anyone else to think and act. This will be as efficient at reducing climate gas emissions as communism is at eradicating poverty.

Now, having dealt with subsidies and regulations the rest of this article will concern itself with why taxation is better than quotas (“Carbon Taxes vs. Cap’n Trade”).

“Cap-and-Trade” – putting a lock on emissions and then selling the remaining emissions rights to the highest bidder – has been introduced as a way to use prices and markets to find the most efficient methods for price reduction. This is a laudable idea which unfortunately suffers many flaws compared to a uniform, global carbon tax. 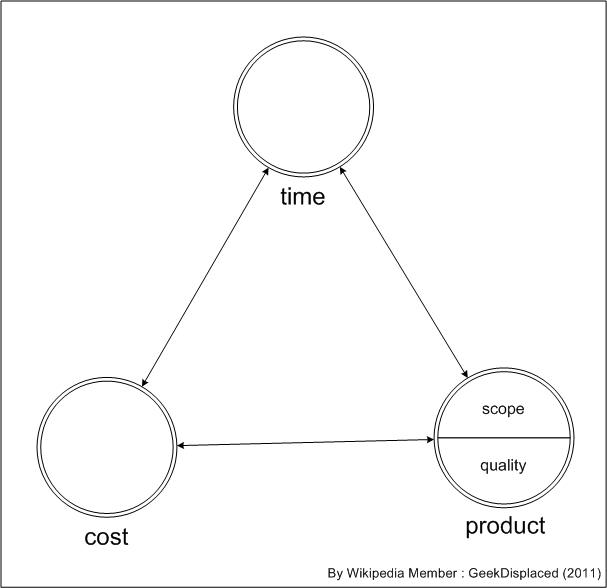 The primary reason the Eco lobby loves Cap-and-Trade is probably that it sets real targets – this much reduction by this date. But, schedule, performance and cost are tightly locked – you can fix any two, but not all three at once.
This means that if you have a fixed reduction target within a fixed date then you have locked the costs – but given the uncertain nature of such investments these costs are almost impossible to estimate with certainty. The fear that extremely high costs will lead to economic ruin is something which fuels opposition and leads to feeble targets. With a carbon tax the costs are much easier to determine – and the costs are anyway what determines how fast reductions can be achieved. This has been described in more detail here:

When cap-and-trade is used the prices for carbon emissions permits will have to vary in order for the emissions targets to be met. This is costly for business and society to live with at the same time as it’s not really very important what the emissions are – only that they are as large as we can afford.

A cap-and-trade system is more complex to implement than a tax (you need a market, etc.) and this complexity makes it easier for lobby groups to get a better deal for their patrons, for instance through free quotas for “special” industries. This hollows out the rules, doles out billions to the unworthy while creating situations where for instance coal burners are rewarded for increasing their CO2 emissions prior to an award of free quotas.

4: Cap’n Trade prevents any other reduction programme from functioning

A Cap and Trade system ensures a certain reduction in emissions. The downside is that it will actively prevent any additional reductions. If you and your family should decide to change your lifestyle to live more environmentally friendly, the only result of your decision to save electricity and bicycle instead of driving would be reducing the cost of emissions permits. The total emissions will stay the same, and your family will only have subsidized the profits of big emitters. Will this motivate you to make a special effort?

If several regions in the world (EU, USA etc) should choose to use cap-and-trade to control emissions then the world will easily get a different price for emissions in each region.

This will again lead to pointless but costly and complicated shifts in global trade. For instance, cement factories (big emitters) could be “moved” from one region to the other – and then the products could be shipped back. This won’t be cheap, but gives no net reductions in total climate emissions.

Allowing transfer of quotas from region to region would give an equalization of emissions prices, but it could also easily result in an emerging economy having to purchase quotas from an industrialized one – despite having lower pr capita emissions. This isn’t likely to be accepted by inhabitants in the poorer country though – instead they will probably choose to simply ignore the entire “carbon capping” system!

Contrast this with a globally coordinated carbon tax levy – here no advantage would be generated due to differences in emission prices nor from being an “established big emitter”.

6: A global Carbon Tax is good for oil consuming states
(at the expense of oil producing ones)

An interesting observation about the effect of a global carbon tax agreement vs a global cap on emissions is that it means transferring oil wealth from producing to consuming states, as described in the blog post below. Since it is mostly consumer states that would be pushing through restrictions in emissions this could be an extra incentive in favour of reductions.

7: A global Carbon Tax agreement will be easier to enforce

Global agreements capping emissions are constructed in a way that prevents them from being respected: targets are set far into the future without any sanctions if they aren’t met. An agreement on a global carbon tax would be much easier to enforce, since it is immediately observable if it isn’t implemented. Special interest groups such as disadvantaged companies in other countries would easily be able to spot the unfair advantage and protest.

Also, a logical extension of a “Carbon Tax Treaty” would be that non-signing states would need to be hit with steep import duties in order to avoid freeriding. If most countries sign up the remainder will not be able to afford staying out. See post:

8. A Carbon tax is a simple and good way to raise tax revenue

Especially for emerging economies the levying of a carbon tax would be a really good way of raising state revenue. A carbon tax is very easy to implement compared to for instance income taxes which developing countries normally do not manage to collect. Additionally it reduces the incentive to pollute – both local and global pollution, and since energy demand has a very inelastic price sensitivity it is possible to raise considerable revenues before the consumption dies off.

Economies tend to not focus on environmental protection until they’ve grown large enough for pollution and degradation to be a massive problem. This has happened with CO2 emissions too – when the Kyoto protocol was first signed in 1997 developing countries were exempted, but already countries like China are among the largest emitters. A global carbon tax would encourage also developing countries to focus on containing pollution from the very beginning, in addition to raising valuable revenue for their own governments. Polluting industries would also not be able to shift to developing countries to escape carbon taxation.

10. A global Carbon Tax is a simple framework for emerging economies join the efforts

A major problem with emissions quotas is that it rewards current large emittors by giving them “ownership rights” to using nature as a dumping ground. If you’re not emitting much because you’re poor this will feel like an unfair system. Carbon taxes offers a simple and uniform framework where one can avoid difficult discussions about re-negotiating quotas as some economies grow compared to others. In a world where “fair” depends highly on your point of view, carbon taxes offers a “fair” system which is also simple and robust.