Have you ever walked along the boulevards of Paris or strolled up from Tianmen Square into the Forbidden City? How did it make you feel? Probably as the designers intended – small! 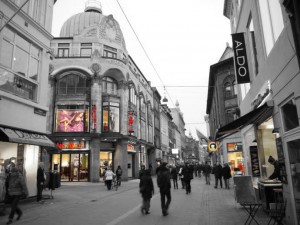 Human beings generally like to spend time in more human-sized areas. Parks or narrow alleys are much more pleasant to stroll around in. A human-friendly city should not consist of huge squares or ultra-wide streets built to impress and to give military forces an easy task of subduing the inhabitants.

Think of the winding alleys of an Italian medieval city, with its small parks and squares. Wouldn’t you like to live there? Especially with the cars and motorbikes gone?

With an absence of noise and traffic it would also be attractive to live in the city centre, instead of commuting in from the hinterland. Thus you would have a good chance of being able to walk to work, or at least doing a very short commute.